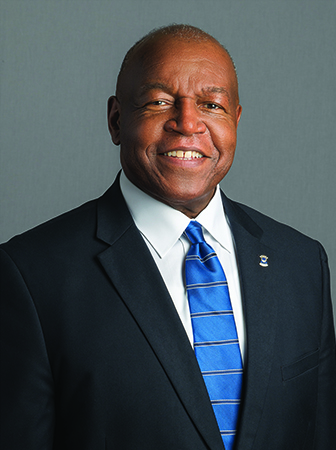 Douglas X. Alexander, from Brooklyn, New York, USA, was appointed to the office of first vice president by the Lions Clubs International Board of Directors on January 9, 2020.

A member of the Brooklyn Bedford Stuyvesant Lions Club since 1984, he has held many offices within the association, including club president, zone chair, region chair, vice district governor, district governor, cabinet secretary, cabinet treasurer and DGE group leader. He also served as a Lions Eye Bank transporter, a member of the District and Multiple District PDG Association, a trustee of the New York State and Bermuda Lions Foundation, and was appointed as the Lions representative to UNICEF-New York from 2012-2014. He has served on the USA/Canada Lions Leadership Forum Planning and Host Committees and has been a presenter at several
USA/Canada Forums.

In recognition of his service to the association, he has received numerous awards including the club Lion of the Year, Club President’s Award, the Robert J. Uplinger Service Award, several District Governor Appreciation Awards, and the Multiple District Membership Growth Award.  He is also the recipient of numerous International President’s Certificates of Appreciation, seven International President’s Awards and the Ambassador of Good Will Award, the highest honor the association bestows upon its members. He is a Dr. Franklin G. Mason Fellow, a W. P. Woods
Fellow and a progressive Melvin Jones Fellow.

In addition to his Lions activities, Vice President Alexander is active in numerous professional and community organizations. He has served as chairperson of the advisory board for the New York Urban League and as a board member of the St. Francis DeSales School for the Deaf. He is also a recipient of the Congressional Record Award.

Vice President Alexander has two daughters, and his partner in service, Shabiki Cazabon, is a Lion and a Progressive Melvin Jones Fellow.